Despite an optimistic conviction on a small scale, nickel prices are attempting to rally cooperatively with most of the rest of the base metals. The uncertain and temporary position, which has been skyrocketing to surprisingly prominent records, reveals quite the testimonial in regard to measurable short-covering demonstrations within sight.

Surprisingly large Q1 deficit
According to the INSG data, which was released last week, there is a quite uncertain future of the nickel market fundamentals in Q1. Despite modeling a 4,000-tonne global deficit, this preliminary estimates that the shortfall will occur at 8,100 tonnes.

With this in mind, take these facts into consideration:
· There was, in fact, a 3700-tonne deficit a year ago
· This estimate is a major change from the 6,700 tonne surplus in Q4 2016
· Total exchange stocks only declined by a net 4197 throughout Q1 which suggests the smaller deficit

Although there will be in-depth revisions to these numbers in the near future, so far the numbers are at a fantastic starting point. Taking into consideration, however, there are some relevant pieces of analysis in relation to broader stock, which need to be examined.

Take the 19500-tonne fall in Chinese off-exchange stocks, for example, which suggest:
· There was a small increase in global producer stocks, which puts forward the idea that the net global stock drawdown in Q1 was closer to 22,000 tonnes.
· There could potentially be an underlying deficit that is much bigger than INSG’s provisions.
· Recent price fragility could have potentially been disproportionate as nickel bears may not have allowed for a market that is surprisingly smaller than it seems

Q1 demand may have been understated
According to INSG global level data for Q1, there is an increase in refined production year on year of 7.9% with usage of 8.7%. The difference in demand estimates branches out from China, where INSG is working with a preliminary increase of 14% in comparison to our own 6.8%. It seems both the INSG and we have highly underestimated the demand there. Stainless steel production data suggests a similar conclusion. Antaike proposes that China’s output was 6.24m tonnes in Q1, of which 300 series constituted 3.18m tonnes. This is an 18% year on year rise. Similarly, there were 17%-18% gains for 200- and 400- series.
Unfortunately, the issue is that there is a swelling in unsold listings due to the Chinese stainless steel milling over. Production is now to be facing reduction and maintenance stoppages in Q2. This means that stainless output and nickel demand is now decreasing. There have been reports of suspension in Jiangsu, Shandong, Guangxi, and Inner Mongolia from mid to late April and potentially more following this.

Indonesian mine ramp-ups dominating Philippine cutbacks
Something that is quite significant to take away from the INSG report, is in the data of mine production. Poor weather conditions and environmental issues causing suspensions subjected Philippine production to dramatic decreases. Apparently, the fall was 36% year on year in Q1, to 35,900 tones. Compare this to the Philippine government, whose data suggests a 47% decline to 23,004 tonnes.

Ferrochrome
It was clear in the recent findings that the decline which was noticed last month in chrome ore prices symbolized the largest monthly drop since late 2011. Despite this, the notable shifts that have occurred in the last few weeks were not foreseen.
The drops were seen in the past few weeks include:
· $210/tonne in South Africa
· $150/tonne in Turkey Supply and demand is obviously a huge factor here. Supply has been taking place as chrome ore miners and smelters have allowed their abilities and capacities to grow due to the multi-year soaring prices, which have been viewed in global chrome markets.
Tsingshan has not yet made an announcement for May tenders about a tender for ferrochrome given the high stocks they currently have given the maintenance outages. In contrast, Baosteel and Taiyuan Iron and Steel have declared large cuts at around 25-30% for May deliveries.
Recently the prices of imported ferrochrome have been reduced to such levels. Import levels into China’s spot market are at $0.86/lb cif Shanghai, and other domestic suppliers within China have lowered their prices to roughly RMB 6,750/tonne. Considering this, one could potentially expect there to be sharp falls around $1.10/lb. However, this is far from definite, and they might not be so severe.
Prices are quite stable in other such areas. High carbon ferrochrome is at $1.35/lb in Europe, and in conjunction, in the USA the price is suggested to be around $1.45/lb. Both of these markets will have buyers who are looking at developments in China’s spot marking and hoping for big reductions in ferrochrome and contract prices.

Molybdenum
Some customers are declaring their options in Europe regarding long-term contracts in advance. Following this, sellers are feeling confident that there will be a high demand until June at the minimum. This means there won’t be much spare for the spot market, as producers and converters will only create enough for their yearly contracts.

A steady rise in the United States of America in alloy availability and the anticipated arrival of more shipments has stimulated suppliers to reduce their offer prices. Spot buying interest is also on a decline with limited 5-10 tonne enquiries and fewer sales being executed. Thus, it is expected that we will see molybdenum prices in the USA trending quite stable to lower in the near future as supplies rise and all the while demand will dispel with the onset of the much slower summer season for steel and other industrial activity.

Scrap prices on a slippery slope

Throughout this month, European and US stainless steel scrap prices have decreased by about 3-5%, mirroring moves seen in primary raw material markets.

Luckily, we do not expect to see further substantial declines in the prices of nickel. The spot market prices of ferrochrome, however, are very likely to slip in the United States of America and Europe in the next few months, following the 25% month on month drop which was seen in Chinese spot prices in the tracker before. 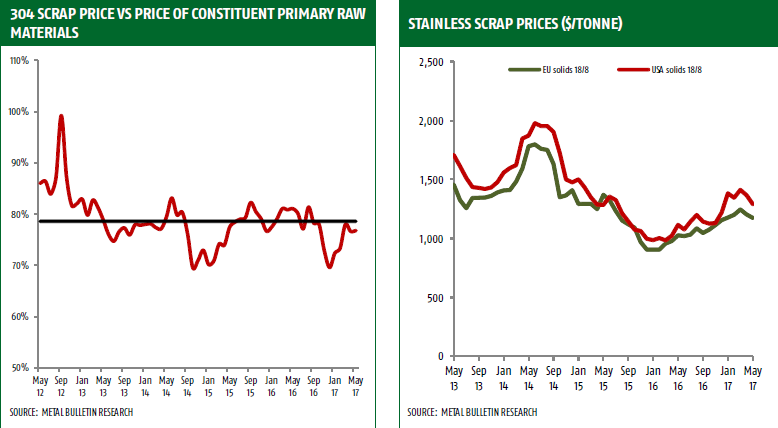