Stainless steel market update Mar’17- Prices reinforce in Europe and USA, however down in China

The Asian stainless suppliers have been struggling to recover after the end of the pricing downturn in February. China has mainly been at the center stage of the price changes in the Asian market. Chinese stainless exports also declined in January. On a year-on-year basis, the prices of total long and flat products exports, excluding tubular goods, fell by 4%. This was mainly a result of stainless cold-rolled (CR) flat products shortages by 11%. This decline in January can also be said to be affected by the price competitiveness of Chinese exports in the key Asian markets. 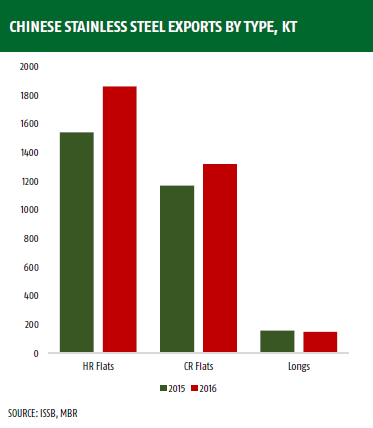 A comparison of Chinese domestic prices between the Wuxi ex-warehouse basis, with East Asian import (CIF) prices, will shed light on the current state of the Asian market. High Chinese prices, relative to regional import prices, discouraged Chinese suppliers from exporting and Asian importers, such as South Korea, Hong Kong, and Taiwan, from importing.

Incidences such as the anti-dumping cases in key import markets for Chinese suppliers, such as the EU and USA, played a key role in the reduction of CR exports. However, there is also more at play. According to the 2016-2016 Chinese Stainless Steel Export Graph By Type’, China’s CR flat-rolled exports rose by 13%, while the stainless exports rose by 16% and despite the stringent trade measures elsewhere. Only the long products exports, that constitute a minority of stainless industry that declined by 6%. From the Chinese Stainless Steel Export Graph, 2015 saw declined stainless steel exports due to rising demand in the far bigger domestic market. In 2016, there was the rise in consumption not only within China but across the world after a depressed 2015 which led to an increase in exports.

Currently, according to the customs updates, stainless exports are soon expected to rise especially due to decline in demand by the domestic market. Over the past few weeks, most stainless steels particularly the austenitic varieties have seen a tremendous decline in prices. A case in point is China, consumers withdrew from the market in March, which caused a spike in reseller inventories particularly in Wuxi. By mid-March, Wuxi recorded the largest inventories since May 2011 and 30% higher than the previous month of February. If this trend keeps up, it is highly likely that the prices will plummet further, unless the consumer demand shoots up fast in the short run.

European market: Prices to rise in April but upward momentum unlikely to persist

These increases can be said to have offset the falls in alloy surcharges witnessed during March which saw the decline of between €10 to 30 per tonne on grades 304 and 316. This means that the month of March did not set the final transaction prices. Much action is expected in the month of April, with an increase in alloy surcharges coupled with the newly-realized higher base prices expected to push final transaction prices up. As a result, the grade 304 materials could shoot up to ranges of €50 to 75 per tonne.

As established earlier, the alloy surcharges are falling during the month of March but are expected to rise again in April. Towards the end of March, Europe’s large-volume stainless steel buyers increased their purchases leading to extended lead times and another increase in base prices. On the other hand, Europe’s stainless steelmakers are taking advantage of the increased demand with lead times being pushed out towards July at present.

While the prices increase is expected to increase further in April, it will be only for a limited time. Prices of both chrome and nickel have fallen recently. For the 2nd quarter of 2017, ferrochrome has seen a decline of 5% on its quarterly contract settlement while nickel is currently trading at prices that are 8% lower than the predicted April prices. This trend is expected to last up to May. However, during the same period prices are expected to retreat once more as the decreased alloy prices are fully passed on from the previous month. In the meantime, the current economic trends in the industry are making it extremely hard for Europe’s stainless steelmakers to increase the base prices of their products.
Generally, European stainless steel prices process cannot be said to be cheap, however, there is little possibility of further price increases. Moreover, given rising trade protectionism worldwide, Europe’s stainless steelmakers are likely to continue to struggle to expand their export volumes. Another aspect likely to affect the market through less significantly is continued added protectionist measures by various countries across the globe.

The month of April has seen price increases that are likely to hold and are largely being accepted by the marketplace. There is also optimism that the US economy will continue to grow with the effects of the past year’s elections having settled. As per April 1st, all the major US stainless steel flat-roll producers led by the North American Stainless’ announced that they would increase the base prices by about 5 to 7% for 200, 300 and 400 series cold-rolled products by reduction of their discount rates, by 2 percentage. Moreover, they will increase plate mill plate or discrete, base prices by cents per pound.

The economic circumstances favor high demands for stainless steel. Despite the weakness in the oil and gas and power generation industries, the success in various sectors such as automotive, home appliances, chemical and petrochemical; commercial food service; and consumer goods have offset this deficit. The US stainless steel market is also optimistic that should the current government continue to bolster the manufacturing sector and infrastructure construction industry especially in bridge projects in or around marine environments, the industry will tremendously grow.

Surcharges are also being pushed up by a combination of base price increases for both flat and long products and stable to slightly up raw material surcharges. Despite the anticipation of an easing of imported steel and continued strong end-use demand and it is highly likely that the prices will stagnate for the next few months or so. This due to the fact that iron prices expected to inch downwards, and the recent reduction of LME nickel prices. Despite these uncertainties in the market, the US stainless steel suppliers are likely to have a good year ahead.