Worldwide stainless steel businesses practically went on a end over the past few months likewise costs dropped strongly on the back for plunging chrome costs and large- volume purchasers waited for a chance to be discovered.

For now, we see a positive outlook for the Chinese steel market; we have witnessed the market align itself on a more stable footing, thanks in part to the burgeoning price corrections and the steady growth in the regional base prices. The order volumes for the months of July and August are healthy and are showing an upward trend; further, producer’s are also foreseeing a positive movement in their margins, and are quickly replenishing their raw materials for fear of a rise in input costs.

But we would be quick to add that the market may be privy to a slump in demand going into the month of November; due to the robust growth in the Chinese real estate market, authorities may just go ahead with their plans to curtail excessive construction in the real estate sector. This may lead to an increase in prices in the third quarter and then a softening of prices for the fourth quarter.

With a tightening of monetary policy, the stainless steel based markets were expected to undergo a downward growth, but the results have been quite surprising. Stainless steel market grew by 6.7% in May as compared to a growth of 5.3% in April, moreover, the industrial growth was at a viable 7.6%, and other more notable sectors like electricity and motor vehicles noticed a growth of 6.2% and 5.2% respectively. 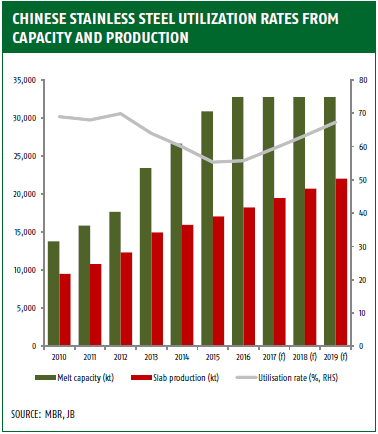 But as could be gauged from the above graph, the capacity utilization, after having seen a slump in the years 2014-2015, is bound to grow to a stable 67-70% but would remain at that level for the foreseeable future (that is until the year 2019). Also, due to the ever-increasing demand, Chinese exporters are expected to stock up on their raw material inventory, which has led to the increase in prices of the quintessential high-grade NPI by 15-20 RMB/unit.

The stainless steel exports from China have seen a mammoth growth from the last year to 322,269 tonnes, a growth of 18.5% over the data noted the previous year – but there was a noticeable slump from the data recorded for May, which stood at a stupendous 338,842 tonnes. Taiwan, yet again, remained the biggest export market for China, with the country shipping upward of 65,513 tonnes of stainless steel into the market.

The market prediction for Japan has remained stable over the third quarter due to the holiday season (July-September), but if a survey conducted by Tarkan is any indication, the market sentiments are expected to be at their highest levels and would be similar to those of pre-2015 levels. Further, South Korea is seeing a rapid and conspicuous rise in prices for stainless steel.

Stainless steel in the European market foreshadows a gloomy picture for the time being, the market was expected to grow at a slow pace and also be prone to falling prices; we saw a massive decrease in the prices in the last month and expected the prices to decrease further in this month – which is what happened.

A majority of distributors are doing out immense amounts of numerical discounts, but are able to enjoy a steady base price on stainless steel. This discount is bound to come to a halt as soon as the manufacturers start re-stocking on their inventories – which goes along expected lines, with an end to the summer season and the start of the new season from September.

Riding on the back of the cuts made on alloy surcharges, many variants of stainless steel have foreseen a rapid decline in their prices to the tune of 50-100Pounds, especially the most in-demand variety: Grade 304, which saw an 80pounds decline on the basis of cuts implemented to the alloy surcharges.

We also concur that the prices wouldn’t drop further from the 400pounds/tonne level that they are at present, and this could actually be the worst possible decline, with the picture looking rosier from this point onwards. Though, Ni may not see a huge rise in its prices; the reason being the strengthening of euro as compared to the dollar ( over 4% rise ).

The three biggest European stainless steel makers – Acerinox, Aperam, and Outokumpu – have announced their Q2 results, which have been mostly positive; though, as is expected, the Q3 quarter may be a witness to falling margins for these behemoths and the stainless steel sector as a whole. 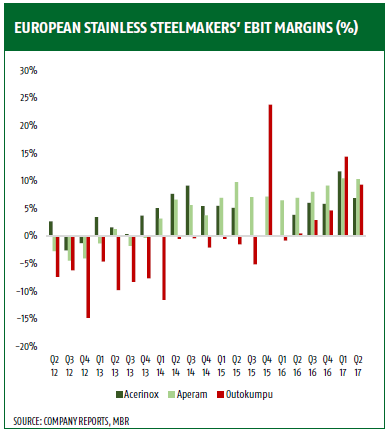 As could be implicated from the graph above, the top three stainless steel makers have seen a rise in their EBIT margins which are bound to see a stall for the Q3 quarter and they are expected to notice a course correction for the Q4 quarter. Further, a strengthening of the euro against the dollar is presumed to offset any unwarranted increase in the prices of the raw materials.

All in all, European stainless steel markets are seeing turbulent times as of July and are expected to face the same problem going into August, but as September arrives and producers restock anticipating the upturn in the market, the pace is surmised to pick up going forward. This is quite attuned to the European market as a whole: an early quarter rise in prices for the stainless steel, then a slump in the summer months and afterward a rapid rise in the prices for the last quarter.

The stainless steel market in the US is witnessing a not so merry picture with the lowest ever recorded decline in the prices of stainless steel in the market. Though, despite the continued downward pressure on the base price, some variety of stainless steel is expected to see more stability in their prices going into August( especially the Austenitic variety ).

Further, to add salt to wounds, the Trump administration’s investigation into section 232, adjudging the impact of import of stainless steel on national security has led to buyers holding back on their purchases, at least for the time being. In addition to that, Nickel prices are also growing at a hefty 3.1% month-on-month, which is bound to add to the woes of the stainless steel makers.

The surcharge for various iterations of stainless steel like the Grade 430 and 409 are expected to remain stable at 22.82 cents/lb and 18.62 cents/lb respectively. Nickel prices are also promised to take a more stable price outlook, due to the increase in the world Nickel production from the year 2013 onwards.

Due to the decline in domestic demand for stainless steel, especially in stainless steel intensive sectors like home-appliances and light trucks, the picture could be enshrined as being much of a mixed bag.